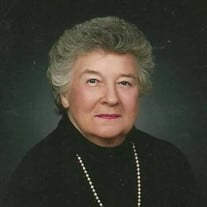 Waynesboro, GA- Betty Lewis Palmer entered into rest at her residence on February 14, 2016, at age 90. Betty Palmer was born on July 9, 1925, to the late Clifford Gray McElmurray and Preston Brooks Lewis. She was preceded in death by her husband,... View Obituary & Service Information

The family of Betty Lewis Palmer created this Life Tributes page to make it easy to share your memories.