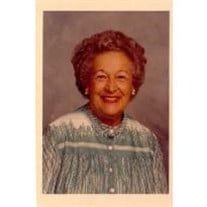 Waynesboro, GA. – Mrs. Virginia Phelps Fulford, 98, passed away Friday, February 4, 2011 at Burke Medical Center. Mrs. Fulford was born on July 25, 1912 in Waynesboro. Her parents were the late Simeon and Agnes Phelps. She graduated from Waynesboro Public Schools and attended Georgia State College for Women in Milledgeville. She was predeceased by her husbands, Dr. Everett A. Bargeron, and Mr. Carlton Fulford, and a daughter, Peggy Harris. She was a lifelong member of the First United Methodist Church and remained active until she moved to Augusta in 1998 to live with her youngest daughter. She will be remembered for her love of life and her enjoyment of being in the company of her family and numerous friends. Her hobbies were bridge and reading which she enjoyed for many years. Mrs. Fulford is survived by two daughters, Patricia Lastinger, of Waynesboro, and Virginia Bargeron, of Augusta, son in law, Thomas Harris, of Crawford, GA., six grandchildren, Patty L. Trainor, John Lastinger, Paige H. Colquitt, Thomas Harris, III, Suzanne H. Mingledorff, and Steven Harris. She is also survived by ten great-grandchildren, and five great-great-grandchildren. Visitation will be held at the funeral home from 1:00 – 2:30 pm, Sunday, Feb. 6. The funeral will be conducted at First United Methodist Church at 3:00 pm on Sunday, Feb. 6. The Reverend Sam Vernon will officiate. Honorary pallbearers will be members of the Brinson Coleman Sunday School Class. Interment will follow at Magnolia Cemetery. In lieu of flowers, the family suggests memorials be made to the First United Methodist Church, PO Box 420, Waynesboro, GA. 30830, or to a charity of one’s choice. DeLoach–McKerley Funeral Home & Cremation Service, 842 N. Liberty Street, Waynesboro, GA 30830 (706-554-3531) is serving the family of Mrs. Virginia Phelps Fulford. You may sign the family’s personal guestbook at www.deloachfuneralhomes.com

The family of Virginia Phelps Fulford created this Life Tributes page to make it easy to share your memories.