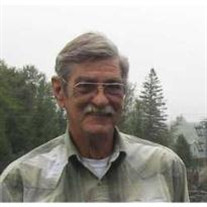 Waynesboro, GA - Russell Vance Keadle, surrounded by family and friends, passed this life on Saturday, February 4, 2012, after heart surgery. Visitation will be from 2:00-3:00 p.m. on Wednesday, February 8, at the funeral home. A celebration of his life will be held at 3 p.m. on Wednesday, February 8, at Deloach-McKerley Funeral Home in Waynesboro, Ga. The committal service with military honors will be at 12:00 p.m. on Thursday, February 9, at the Beaufort National Cemetery in Beaufort, S.C. Russ was born on February 23, 1939, in Camilla, Ga., to Lula Mae Hays and P.J. Keadle. He had 11 brothers and sisters. Russ was a veteran of the U.S. Army, with service in Vietnam, Germany and Japan. He was a loving husband, father and grandfather, who left this world a better place for his humor, his service to country and his dedication to his family. He is survived by his wife, Susanna Kay Wilkinson Keadle of Waynesboro; son, Russell V. (Rusty) Keadle Jr. of Augusta, Ga.; daughter, Angela Louise Keadle Stephens of Pearisburg, Va.; and six grandchildren: Rebecca K., Charles B. and Lee C. Stephens; and Matthew V., Nolan R. and Austin W. Keadle. He is also survived by brother, Paul J. Keadle, Jr., of Apex, N.C., and sisters Juanita K. Adams of Gainesville, Ga., and Gloria Nan K. Gurley of McDonough, Ga. He was preceded in death by brothers, Spencer and Charles, and sisters, Agnes, Mildred, Virginia, Dorothy, Louise, and Madge. Russ served as a captain in the Georgia National Guard from 1957 to 1959 and in U.S Army as an intelligence officer from 1960 to 1969, serving a year in combat in Vietnam. He was awarded the National Defense Service Medal, the Vietnam Service Medal and the Vietnam Campaign Medal. After his military service he worked as a Georgia Pacific mill manager until retirement. A son of the South, Russ loved Westerns and horses and was a cowboy once. He will be greatly missed by all who knew him. DeLoach–McKerley Funeral Home & Cremation Service, 842 N. Liberty Street, Waynesboro, GA 30830 (706-554-3531). You may sign the family’s personal guestbook at www.deloachfuneralhomes.com

Waynesboro, GA - Russell Vance Keadle, surrounded by family and friends, passed this life on Saturday, February 4, 2012, after heart surgery. Visitation will be from 2:00-3:00 p.m. on Wednesday, February 8, at the funeral home. A celebration... View Obituary & Service Information

The family of Russell Vance Keadle created this Life Tributes page to make it easy to share your memories.