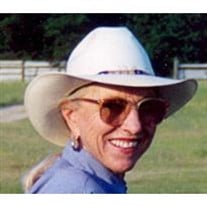 Waynesboro, GA – On April 27, 2010, Myrtis Elizabeth Stone Bailey entered into the presence of her Savior at her home on Windy Hill Ranch in Burke County. She was a daughter of the late David Leroy Stone and Myrtis Tinsley Stone of Waynesboro. Betty was a life-long resident of Waynesboro, who along with her devoted late husband of almost fifty years, J. W. “Squat” Bailey, established a very successful Quarter Horse business at Windy Hill Ranch just south of Waynesboro. There they raised six children and numerous World Champion title holders while earning places in multiple industry Halls of Fame as breeders, exhibitors and judges. From the age of two years until the last month of her life, Betty was more at home on the back of a horse than anywhere else on earth. She was qualified and called on to judge horses for thirteen different breed associations. At age fifty Betty got her private pilot’s license and flying became another of her passions. At age seventy she flew herself and a load of Bibles, in her own twin engine airplane, to Russia where she spent the summer helping missionaries. Recently, Betty served in the community as chairman of the local Board of Equalization and was an active member of the local Chapters of The Daughters of the American Revolution and The United Daughters of the Confederacy, where she served as an officer in both and as President of the UDC for two years. She was also a member of the local chapter of The Colonial Dames and Burke Haven Chapel. Betty was recognized by all who knew her as one who lived her life to the fullest, never slowing down. Her legacy to those who loved her and knew her best will be her zest for life, her unwavering devotion to her faith, and her outspoken testimony of it. Betty was preceded in death by her parents; her sister, Mary Stone Hargrove; her brothers, Roy, Jr. and Paul Sinclair; her husband, J. W. “Squat” Bailey; her second husband, Leroy Dant; and her oldest daughter, Betsy Bailey Jordan. She is survived by her brother, Bill Stone; and her current husband, Ray Trenter, in whose loving care she departed this life. She is also survived by four daughters, Nell Headley, Anne Youmans, and Kay Bailey Stevens, all of Waynesboro, and Mary Davis of Cimarron, New Mexico, along with her only son, Jim Bailey of Colleyville, Texas. Her other survivors include twelve grandchildren and six great-grandchildren. Pallbearers will be her grandsons, Jim Jordan, III, Hunt Headley, III, Chris Youmans, Walter Davis, J. W. “Jake” Bailey, III, and Pete Adams. The family will receive visitors on Friday, April 30, 2010 from 6:00-8:00 p.m. at DeLoach-McKerley Funeral Home in Waynesboro. Funeral Services will be held Saturday, May 1, 2010, at 3:00 p.m. at the Vidette United Methodist Church. Interment will follow at Rose Dhu Cemetery in Vidette. Rev. Gary Linebaugh and Dr. Dale Linebaugh will be officiating. In lieu of flowers, the family suggests that memorials be made to Samaritan’s Purse International Relief, P. O. Box 3000, Boone, NC 28607 (828-262-1980). DeLoach–McKerley Funeral Home & Cremation Service, 842 N. Liberty Street, Waynesboro, GA 30830 (706-554-3531) is serving the family of Betty Bailey. You may sign the family’s personal guestbook at www.deloachfuneralhomes.com

Waynesboro, GA – On April 27, 2010, Myrtis Elizabeth Stone Bailey entered into the presence of her Savior at her home on Windy Hill Ranch in Burke County. She was a daughter of the late David Leroy Stone and Myrtis Tinsley Stone of Waynesboro.... View Obituary & Service Information

The family of Myrtis Elizabeth Stone Bailey created this Life Tributes page to make it easy to share your memories.