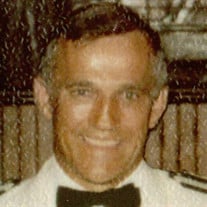 Lt. Colonel Kenneth Reed Davis, Sr. (Retired) “Kenny”, age 88, was born in Frederick, Maryland on March 06, 1929. He died, July 18, 2017 at the Charles Norwood VA Medical Center in Augusta, Ga. His parents were Norvel O. Davis and Grace Ramsburg Davis. He graduated from McKinley Technical High School, Washington, D.C., the University of Maryland, College Park, MD. with a Bachelor in Agriculture, and The George Washington University in Washington D.C. with a Master of Science in Public Administration. He is survived by his wife of 40 years, Theresa (Terri), two daughters, Charlene Hiebel (Paul), Wetumpka, AL., and Pamela Jones, Suwanee, GA., and son Kenneth R. Davis Jr. Clearwater, SC. He has two granddaughters, Michelle Jones Trotter ( Brian ) and Laura Jones of Suwanee, GA. , and two grandsons Reed Davis and Greyson Davis of Clearwater, SC. He is survived by his younger sister and her husband, Joanne and Anthony Miller, of Thousand Oaks, California, brother in law Charles H. Day, Laurel, MD., and sister in law Elizabeth Davis of Helotes, TX. He leaves four great grandchildren, Caleb Jones, Dakota Jones, Andrew Trotter and Isabella Grace Trotter, all of Suwanee, GA., and many nieces and nephews. Also surviving are his extended family, Jeff Wells, of Towson, MD., and Steve Wells, of Macon, GA., and grandchildren, Wesley Wells of Douglasville, GA., Randall Wells of Charleston, SC, Heather W. Parrish, of Metter, GA., Jade Wells, of Kennesaw, GA., Morgan Wells, of Rome, GA., and Brannon Collins of Clearwater, SC., and a special family member, Cindy Wells. He was preceded in death by his parents, one brother Austin O. Davis, and one sister Susan Davis, and his first wife, Virginia Day Davis, the mother of his children. In between USAF Assignments in Las Vegas, NV., Greenville, MS., Selma, AL., Montgomery, AL., and finally Savannah, GA., he taught math and science at Sardis and Gough ,GA. schools. He also taught at Blakeney Middle School in Waynesboro, GA. He was a graduate of the Air Command and Staff College, the Air War College, and the Military Air Transports Systems College at Maxwell Air Force Base in Montgomery, Alabama. Kenny spent most of his career as a military pilot for the US Air Force and the Georgia Air National Guard. He flew F-86 Sabre jets in combat from Kimpo Field in South Korea and C 135s in transport missions in Viet Nam from Hunter Field, Savannah, GA. He is a member of the American Legion Post 150 Morris - Goolsby Chapter, Blythe, GA. On September 21, 1953 while at Kimpo, South Korea, he witnessed the incoming landing of a Soviet MIG-15 piloted by a North Korean as he prepared to depart in his F-86. In 2009 he aided the Birmingham, Alabama Museum of Flight to recreate the Kimpo Base display to honor the Korean War veterans. At the opening ceremony of this memorial, he finally met the North Korean pilot who received asylum in the United States in 1954. In 2013 he attended the 60th anniversary of the USAF Pilots Reunion, at Eglin AFB, Ft. Walton, FL, along with the surviving 15 pilots from his class 52H of 1952. They are one of the oldest and last classes of USAF pilots to maintain annual reunions. He reveled in his fighter pilot assignments protecting the Yalu River Demilitarized Zone between China, North Korea and South Korea almost as much as he delighted in crop dusting many of Burke County’s larger row crop farms when off duty in the summers. After retiring from the military, he worked his family tree farm and poultry farm in Burke County. He served as City Administrator in Mayor Paul S. Stone’s administration. He served several terms on the local Burke County School Board. He was active for years in St. Michael’s Episcopal Church, and later became a founding member of The Waynesboro Branch of the Church of Jesus Christ of Latter Day Saints (Mormon Church). Kenny found peace most of all with his wife, Terri, on his family home, Kenwood Farms in Idlewood. His funeral will be at 11:30am, July 21,2017, from The Church of Jesus Christ of Latter Day Saints, Waynesboro Ward, 284 Highway 56, Waynesboro, GA. Bishop Lamar Willis will officiate. The family will receive friends at the church beginning at 10:00 am. Following the church service, his burial with full military honors will be at the Old Church Cemetery in Idlewood. Pallbearers will be Wesley Wells, Randall Wells, Andy Parrish, Tracy Walker, Dennis Dixon, and Brannon Collins. Honorary Pallbearers will be past members of the Georgia Air National Guard of Savannah, Georgia. The family requests memorials may be made in Kenny’s name care of the Augusta Warrior Project, 701 Greene Street, Suite 104, Augusta, GA 30901 or the Veteran’s Community Center, 808 Davis Road, Waynesboro, GA 30830. DeLoach-McKerley-Prescott Funeral Home & Cremation Service, 220 East 6th Street, Waynesboro, GA 30830 (706-554-3531) You may sign the guest book at www.deloachfuneralhomes.com.

The family of Kenneth R. Davis Sr. created this Life Tributes page to make it easy to share your memories.