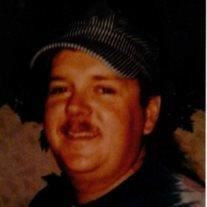 Jay “The Hit Man” Hart Feb. 19, 1965 – Feb. 16, 2014 He was tired physically and emotionally, it had been a long two weeks-he laid down for a nap, his cell phone went off. It was our Lord. He told “The Hit Man” he really needed a top notch drummer to lead his band of angels on the largest stage he would ever know. Only thing was the gig was for eternity. Jay never hesitated and he was gone. Jay is preceded in death by his best friend and companion of twenty years, Boba Louie. He is survived by his parents, Jesse Hart, Sr. and Bonnie Hart of Melba Dr. Hephzibah, GA. who were so devastated for their loss. They loved him so. He is also survived by two sisters, Kimberley J. Rote of Lake Station, IN and Greta Lynn Walden (TJ Walden) of Patterson Bridge Rd. Hephzibah, GA; a daughter, Brittney M. Thomaston of Grovetown, GA; two grandchildren that he loved so dearly, Jayson Oliver Harrison, age 4, and Maria Esmeralda Thomaston, 3 weeks old. His grandchildren will know their grandpa through their mom and friends that knew and loved him. They will know what a good man he was. He is also survived by 4 awesome nephews, Timothy Allen Hart (Crystal Hart) of Lake Station, IN, Zackary Wayne Rote of Hobart, IN., Richard Allen Reynolds of North Augusta, SC, Matthew Wayne Reynolds of Aiken, SC; a “special” friend, Lori Mazzell of Grovetown, GA; and so many other family and friends that have known him, loved him, appreciated and enjoyed his awesome talent. Most of all his parents loved him and respected him. He was a wonderful baby, little boy, and man. Jay was a kind, considerate, fantastic, loyal and trustworthy friend. He never met a stranger and never passed a person in need.

The family of Jesse R. Hart created this Life Tributes page to make it easy to share your memories.