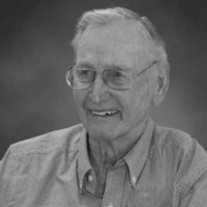 Fred Chambers, Jr., 92, died peacefully at home, surrounded by his family, on Monday, July 19, 2021. He was born on October 12, 1928 in Deepstep, Washington County GA. He was one of seven children born to Fred Chambers, Sr. and Mary Wiggins Chambers. He learned to be a farmer by helping his daddy on the farm and he developed a love for the land that shaped his entire life. Whether he was on his tractor, digging in the dirt, or harvesting his watermelons, farming was more than a career. He loved to share what he grew. Fred was an outdoorsman. He enjoyed hunting, fishing, and camping and he loved his dogs. Fred served his country in Korea and later became a member of the American Legion. He met Martha Ann Miles in the fall of 1953 and decided very soon after that to ask her to be his wife. They were married March 5, 1954. Fred graduated from the University of Georgia in 1956 with a B.S in Agronomy. He began his career with the Farmers’ Home Administration, and that eventually brought him to Waynesboro. Later he became the Plant Manager of Kaiser Chemical Company. After his retirement from Kaiser, he established Burke Chemical Company with his friend, Ware McCallum. No matter where he was, he served and advised farmers all over Burke County and surrounding areas. Fred and Martha were charter members of Rosemont Baptist Church. He served in many capacities at Rosemont, teaching Sunday School and serving as church treasurer, trustee, and deacon. The church designated him Deacon Emeritus in 2006. He was preceded in death by his parents; a sister, Mary Floyd Cooke; and three brothers, James H. Chambers, Frank Chambers, and Robert “Bobby” Chambers. He is survived by his devoted wife of 67 years, Martha; five children, Carol Davis (Walker), Carlton Chambers (Becky), Joan Perry (Kent), Tommy Chambers (Angela), and Laurie Hilburn (Rusty); two brothers, Douglas Chambers and Ronny Chambers; 12 grandchildren, Ben, Katherine, Andy, Ashley, Amber, Stephen, Christopher, Lauren, Riley, Taylor, Alexa, and Chandler; and by seven great grandchildren and one more on the way. The family wishes to express their appreciation to Fred’s caregivers: Lena Royal, Rose Landis, Bessie Jones, Taronda Heggs, and Shirley Smiley. The funeral service will be held at Rosemont Baptist Church, 522 Hwy 25 Waynesboro, on Thursday, July 22 at 11:00am, followed by a private burial. Family members will greet friends at the church from 9:30am to 11:00am. Pallbearers will be grandsons. Honorary Pallbearers will be Henry Hopkins, Bobby Glisson, Sr., Tom Ryder, Kenneth English, Ware McCallum, Grady Mobley, Charlie DeLaigle, Shorty Mead, Rosemont Deacons, and members of the American Legion. In lieu of flowers, the family has requested that donations be made to the Rosemont Baptist Church Vision Fund. DeLoach-McKerley-Prescott Funeral Home & Cremation Service, 220 East 6th Street, Waynesboro, GA 30830 (706-554-3531) You may sign the guest book at www.deloachfuneralhomes.com.

Fred Chambers, Jr., 92, died peacefully at home, surrounded by his family, on Monday, July 19, 2021. He was born on October 12, 1928 in Deepstep, Washington County GA. He was one of seven children born to Fred Chambers, Sr. and Mary Wiggins... View Obituary & Service Information

The family of Fred Chambers Jr created this Life Tributes page to make it easy to share your memories.