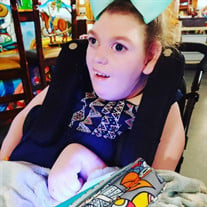 Miss Carleigh Peyton O'Connor ran into the arms of Jesus on Sunday, August 22, 2021, being held by her Mama, Daddy, and sisters. Carleigh was born on November 2, 2006, in Augusta, GA. Although her Earthly limitations and burdens were many, Carleigh handled it all with a constant smile and sweet grace. Without ever speaking a word, she touched the lives of all who knew her. She was the definition of love without limits and light followed her everywhere she went. Her family is comforted knowing that she was greeted in Heaven by her loving Savior and is now free to just be a little girl. She will forever be Our Sunshine. Carleigh is survived by her blessed father and mother, Chad Coty O'Connor and Jana Rodriguez O'Connor; her loving sisters, Madisyn O'Connor (17) and Lexie O'Connor (13); her paternal grandmother, Gail Beverly; maternal grandparents, Joel and Renee Rodriguez and Chris and Pam Rayburn; maternal great grandmothers Antonia Rodriguez and Martha Rayburn; as well as her loving uncles, aunts, and cousins. She was preceded in death by her paternal grandfather, Donald Beverly. Pallbearers will be Keith Shears, Jeremy Rodriguez, Cameron Rodriguez, and Palmer Rodriguez. Honorary pallbearer will be Lanton Johnson. The family would like to express their heartfelt thank you to the doctors and nurses at the Children's Hospital of Georgia, Johns Hopkins All Children's Hospital in St. Petersburg, FL, and Egleston Children's Hospital in Atlanta as well as her pediatrician Dr. Karen Foushee and staff for their kind and gentle care of their precious girl. The family will receive friends from 6:00pm to 8:00pm Friday, August 27 at the funeral home. Funeral Services will be held 11:00am Saturday, August 28 at Oasis Church in Hephzibah with Rev. Wesley Weatherford officiating. Burial will be private. Memorial contributions in Carleigh's name may be made to, Augusta or Atlanta area Ronald McDonald house charities, the Center for New Beginnings in Waynesboro or the Carleigh O'Connor Memorial Scholarship fund at First National Bank of Waynesboro, GA. DeLoach-McKerley-Prescott Funeral Home & Cremation Service, 220 East 6th Street, Waynesboro, GA 30830 (706-554-3531) You may sign the guest book at www.deloachfuneralhomes.com.

Miss Carleigh Peyton O'Connor ran into the arms of Jesus on Sunday, August 22, 2021, being held by her Mama, Daddy, and sisters. Carleigh was born on November 2, 2006, in Augusta, GA. Although her Earthly limitations and burdens were many, Carleigh... View Obituary & Service Information

The family of Miss Carleigh Peyton O'Connor created this Life Tributes page to make it easy to share your memories.

Miss Carleigh Peyton O&#39;Connor ran into the arms of Jesus on Sunday,...