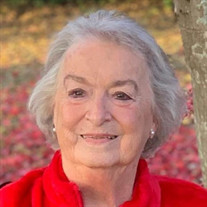 On June 19, 1940, Barbara Ann Daniel was born to Betty Louise Wade Daniel and Robert “Bob” Theodore Daniel in Augusta, GA at University Hospital. They brought their redheaded baby girl home to Waynesboro, GA. In 1942, they began their homestead on what would become the homeplace. In 1944, they welcomed Robert Theodore Daniel III, her beloved brother. Life was good and they worked hard to build their little slice of the American Dream. Joining them in 1955 was Robert Louis Stevenson, their cousin who lost his mother, Betty’s sister Helen. He became their brother. Barbara graduated from Waynesboro High School in 1958 and she moved to Atlanta for school. Also moving to Atlanta from his home in Millstone, KY was Bennett David Collier. When they met in September 1959, it was love at first sight and they married on December 24, 1959. On December 9, 1961, God blessed them with a daughter, Mary Melissa Collier. But God wasn’t through, He blessed them with another daughter, Kristy Michele Collier, who was born on December 24, 1969, which was also their 10th anniversary. Their union would last almost 55 years until David went to Heaven on April 12, 2014. Barbara and David lived in Atlanta until 1973 when they moved home to Waynesboro, GA. Many, many trips were made to Kentucky to visit her new family of eight Collier siblings and their families, who were her precious nieces and nephews. Barbara worked at Burke County Hospital in administration for 15 years when she then began her work as secretary at her beloved Rosemont Baptist Church with Rev. Earl Saxon. She served there until 1997 when she and David opened their printing business First Edition Custom Printing. Barbara became a grandmother on July 23, 1996 when Dalton Michael Smith burst into her life. Such joy was had loving on their precious gift from God. Then that joy doubled when Collier Bryson Smith made his appearance on August 9, 2000. The two grandsons spent many hours at Ma and Pa’s house out in the country. God wasn’t through and Ashley GraceAnn Herrington made the family complete on May 14, 2002. Her three grandchildren were her life. After her sweetheart left this earth in 2014, she spent the remaining 6 ½ years with her beloved four legged baby girl, Mollie---being loved and adored by her family. Darrell Johnson become her son and they spent many hours together as he cared for her every need. He was such a special and dear person to her. Barbara accepted Jesus Christ as her Savior early in life and strived daily to be His faithful servant. We rejoice that she is now in His presence. She stepped peacefully into eternity after battling with her whole might this horrible Covid virus. She was preceded in death by her parents, Betty Louise Wade Daniel Cooley and Robert “Bob” Theodore Daniel; her husband, Bennett David Collier; and her special son, Vince Phillips. To live in her amazing legacy she leaves her two daughters and their families, Mary Melissa Collier Brantley and her husband John F. Brantley and their daughter, Ashley GraceAnn Herrington and Kristy Michele Collier Smith and Darrell L. Johnson and her sons, Dalton Michael Smith and Collier Bryson Smith and their father, Michael Smith; her two brothers and their families, Robert Theodore “Ted” Daniel III and his wife, Linda Rogers Daniel and their two sons, Robert Theodore Daniel IV and his wife Jenifer Thompson Daniel and their son and two daughters, and Brian Keith Daniel and his wife Stephanie Iler Daniel and their two sons, and Robert “Rob” Louis Stevenson and his wife, Elaine Childs Stevenson and their two sons, Russell Lloyd Stevenson and his two sons and Robert Keith Stevenson and his wife Allison Tutterow Stevenson and their three sons; her uncle and his families, Clarence Wade Stevenson and his wife, Ann Evans Stevenson and their two sons and two daughters; her aunt and her family, Betty Snellgrove Wade, and her two daughters, Joyce Wade Loflin and her daughter, and Debra Wade Fuller and her son and daughter; her Kentucky family; and her dear friends, Linda Beasley, Tammy, Tina, Tracie and their families, Dean Stowe, and Shawn Crosby. The family will receive friends Saturday, December 26, 2020, from 1:00pm-3:00pm at the funeral home. Burial will be private. The family would like to extend a special thanks to Dr. Bonnie Jenkins, Dr. Walter Voyles, the nurses, doctors, and staff at Burke Medical Center and the nurses, doctors, and staff on the Covid ICU unit at Augusta University Medical Center. DeLoach-McKerley-Prescott Funeral Home & Cremation Service, 220 East 6th Street, Waynesboro, GA 30830 (706-554-3531) You may sign the guest book at www.deloachfuneralhomes.com.

The family of Barbara Ann Daniel Collier created this Life Tributes page to make it easy to share your memories.