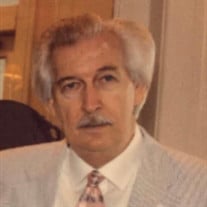 Ralph Evans Dickey entered into rest Thursday October 10, 2019. He was the son of Emerson and Eunice Dickey. He attended and graduated South Georgia College and Augusta College, as well as the banking school at University of Georgia. Upon graduation, he joined Georgia Railroad Bank in Augusta where he was employed for 19 years. In 1987, he returned to Waynesboro to accept a position at Bank of Burke County (now Southern Bank). He completed his career there, retiring after 50 years in the banking industry. He has been married to his wife Jean for 51 years. They have 3 children: Laurie, Todd, Josh (Jen), and one granddaughter, Nora. He is also survived by his sister Rosemond Sheets, and a number of nieces, nephews, and cousins. Ralph was involved in many civic and community endeavors. He served as past President and Director of Waynesboro Exchange Club, served as Director of Burke County Hospital Authority, founding Director of Drug Free Burke Inc., advisory board at Burke County High School, Director of Augusta Civitan Club, Director of Augusta Operations Association, and President of the Gold G Club in Augusta, GA. But most of all, he was a loving husband, father, brother, and friend to many. He had a number of interests including cheering for the Georgia Bulldogs on Saturdays, fast cars, living on "beach time", and helping others. The family will receive friends from 1:00pm to 3:00pm Sunday, October 13 at the funeral home. Funeral Services will be 3:00pm Sunday, October 13 in the DeLoach-McKerley-Prescott Funeral Home Chapel. Burial will follow at Magnolia Cemetery. Honorary Pallbearers will be members of the Waynesboro Exchange Club and Southern Bank Employees. Flowers will be accepted as well as donations to Old Fella Burke County Animal Rescue. DeLoach-McKerley-Prescott Funeral Home & Cremation Service, 220 East 6th Street, Waynesboro, GA 30830 (706-554-3531) You may sign the guest book at www.deloachfuneralhomes.com.

Ralph Evans Dickey entered into rest Thursday October 10, 2019. He was the son of Emerson and Eunice Dickey. He attended and graduated South Georgia College and Augusta College, as well as the banking school at University of Georgia. Upon graduation,... View Obituary & Service Information

The family of Mr. Ralph E. Dickey created this Life Tributes page to make it easy to share your memories.