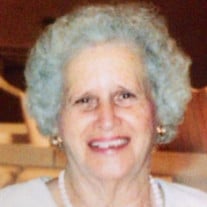 Girard, GA- Margaret Allean Knight Glisson, 95, of Glisson Rd., beloved wife of the late Albert Burney Glisson of Girard, GA, entered into rest Wednesday, April 17, 2013 at Brentwood Health and Rehabilitation in Waynesboro, GA. Her husband predeceased her on April 17, 1970. Mrs. Glisson was born on November 4, 1917 to the late James Warren and Minnie Clark Knight. She grew up on Knight Road in her beloved McBean/Green’s Cut Community. In addition to her husband and parents, she was predeceased by her daughter, Bessie G. Adams and her husband William Adams of Savannah, GA and also her only brother, Leroy Knight of Girard, GA. She is survived by her children and their spouses: Jerrie G. and Joe Chiodo of Farrell, PA., Henry and Sylvia Glisson of Girard, Henrietta G. Carmack of Girard, and Jane G. and Terry Syms of Waynesboro. She was blessed with nine grandchildren: Troy (Kay) Smith of Waynesboro, Danny Rabold of Farrell, PA.; Ashlynn (Scott) Boley of Savannah, William (Vanessa) Adams, Jr. of Clive, Iowa, Elizabeth French of Savannah; Gerald (Qiu Yan) Carmack of Augusta; Warren (Brandi) Glisson of Augusta; Melissa Stafford of Evans, GA., and Bud North III of Macon, GA. Her thirteen great grandchildren are: Rhett, Dylan, Caleb, Collin, and Conner; Abigail and Amelia, Clara and Adam; Mei Li; Hayden; and Madalyn and Joshua. She married at the age of 21 and joined her husband on the Glisson farm. She was a faithful farmer's wife until she became ill and moved to Brentwood in 2002. She was so proud that her only son Henry and his wife Sylvia continue to operate the family farm. Mrs. Glisson was the oldest member of Bethany United Methodist Church in Girard. She was a devoted mother to her five children (including “her twins” Henry and Henrietta) and a loving grandmother. She was a true southern lady and a wonderful cook. The funeral Service was held at 12 noon on Saturday, April 20 at Bethany United Methodist Church. Rev. Tom Tidwell and Rev. Sue Diebolt officiated. Interment followed at Burke Memorial Gardens in Waynesboro. Grandsons served as pallbearers. The family received friends one hour prior to the service at the church. Flowers will be appreciated; however, memorials may be made to Bethany UMC, c/o Glenda Manley, 464 Heath Rd. Girard, GA 30426. DeLoach–McKerley Funeral Home & Cremation Service (706-554-3531). You may sign the family’s personal guestbook at www.deloachfuneralhomes.com

The family of Margaret Allean Knight Glisson created this Life Tributes page to make it easy to share your memories.