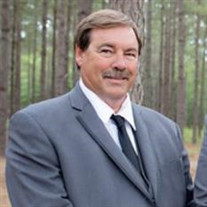 James “Rickie” Blackburn, 58, entered into rest Wednesday, April 18, 2018. He was born in Albany, Georgia and was a longtime resident of Waynesboro. He graduated from his beloved Edmund Burke Academy and while his children attended, he served on the Board of Directors for 9 years, most of which served as treasurer. He was President and Owner of Delta Termite and Pest Control Inc for 23 years, a family business where he started working at the age of 18. He was a faithful member of the Waynesboro Masonic Lodge #274, where he was a past Worshipful Master and served as treasurer for over 25 years. He was a member of the First Baptist Church of Waynesboro, served on the Burke County Hospital Authority, Capital City Bank Board of Directors, past president of the Burke County Chamber of Commerce and was very passionate about getting involved in our community from cooking at local events to the Bug Club in area schools. Rickie enjoyed spending time with family, especially his grandchildren, traveling with friends, stress management meetings, fishing and grilling and loved his 57 Chevy Truck! He is survived by his wife of 34 years, Jeanie Saxon Blackburn; three children, Jason Blackburn and wife Caroline, Ben Blackburn and wife Leigh, and Janna Blackburn all of Waynesboro; four grandchildren, Mills and Carson Blackburn and Sadie and John Luke Chance; his parents, Frankie Blackburn Hall and the late Jimmie Blackburn; a brother, Steve Blackburn and wife Jan of Waynesboro; nieces, Anna Marie, Sally Kate and the late Josi Blackburn; parents-in-law Gloria Saxon and the late Marvin Saxon; brother-in-law, Rob Saxon of Macon; his extended Delta family; and countless family, friends, and a community that meant the world to him. The family will receive friends from 4 p.m. to 7 p.m. Friday, April 20 at DeLoach-McKerley-Prescott Funeral Home. Funeral Services will be 11a.m. Saturday, April 21at First Baptist Church of Waynesboro with Bill Lively officiating. Burial will private. Active Pallbearers will be Sam Story, King Rocker, Jim Sturkie, Charlie Lanier, Jerry Salter, Dr. Johnny Christian, Chris Collins, and Stephen Murray. Honorary Pallbearers will be his Delta Family and members of the Waynesboro Masonic Lodge #274. Remembrances may be made to the Edmund Burke Endowment Fund, PO Box 787, Waynesboro, GA 30830 or the Masonic Home of Georgia, 1417 Nottingham Dr. Macon, Ga. 31211 DeLoach-McKerley-Prescott Funeral Home & Cremation Service, 220 East 6th Street, Waynesboro, GA 30830 (706-554-3531) You may sign the guest book at www.deloachfuneralhomes.com.

James &#8220;Rickie&#8221; Blackburn, 58, entered into rest Wednesday, April 18, 2018. He was born in Albany, Georgia and was a longtime resident of Waynesboro. He graduated from his beloved Edmund Burke Academy and while his children attended,... View Obituary & Service Information

The family of James "Rickie" Blackburn created this Life Tributes page to make it easy to share your memories.