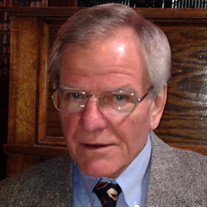 Henry Carlton Daniel III passed away on Tuesday Morning September 3, 2019. Graveside Services will be at the family cemetery on Applewhite Plantation at 11:00 a.m. Thursday, September 12. He was preceded in death by his parents Emily Applewhite and Henry Carlton Daniel, Jr.; a sister, Sarah Ann Shapard; and stepdaughter, Christian Daniel Giles. He is survived by his loving wife and best friend, Deborah Chambers Daniel; a sister, Billie Daniel Parker; a stepson, Nelson Daniel; a grandson, Jay Daniel; several nieces and nephews; and his favorite cousins, Dr. Shelley Griffin, William Oppenheimer, Harris Oppenheimer, and Leonard Herrington. Henry was born May 16, 1949. He was 4th generation owner and president of C.P. Daniel’s Sons, Inc., which was established in 1903, owner of the homestead tract of Applewhite Plantation, which was established in 1825, owner of Security Self Storage, and Daniel Brokerage all located in Burke County. He was a past chief of the Burke County Board of Registrars. He was a member of the Georgia Army National Guard for 6 years during the Vietnam War. Henry was a lifelong Alabama Crimson Tide fan, with many family ties to the University. He lived a full and wonderful life that included many friends and acquaintances through his personal life and business career. Henry was a Christian and an honest man. He was an avid and devoted outdoorsman throughout his life but always a true conservationist. In the field of fishing and hunting, he set many personal goals and accomplished them all. He set a world fishing record in 1976 that still holds today. He loved and cared for his numerous hunting dogs. Perhaps Henry’s greatest love was the study of prehistoric Americans. He was an avocational archaeologist and often said it was the “unknown” in archaeology that enhanced his hobby. At age 68, he was honored by the Burke County Sheriff’s Office for his heroism in taking down 2 armed robbers with a shotgun after they had robbed and brutally beat him. If you wish, memorials may be made to the Central States Archaeological Societies, c/o The Georgia Chapter, 2453 Sound view Ct., Florissant, MO 63031-5643. DeLoach-McKerley-Prescott Funeral Home & Cremation Service, 220 East 6th Street, Waynesboro, GA 30830 (706-554-3531). You may sign the guest book at www.deloachfuneralhomes.com.

Henry Carlton Daniel III passed away on Tuesday Morning September 3, 2019. Graveside Services will be at the family cemetery on Applewhite Plantation at 11:00 a.m. Thursday, September 12. He was preceded in death by his parents Emily Applewhite... View Obituary & Service Information

The family of Henry Carlton Daniel III created this Life Tributes page to make it easy to share your memories.