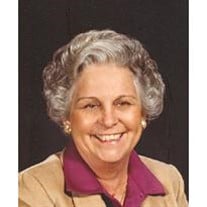 Macon, GA. - Elise Lewis Brooks, 90, passed away on Saturday, July 04, 2009. Funeral services will be held at First Baptist Church of Waynesboro with Dr. G. Al Wright, Jr. officiating, on Tuesday July 7, 2009 at 11:00 in the morning with interment immediately following at Burke Memorial Gardens. The family will receive friends on Monday evening from six until eight pm at DeLoach Funeral Home, Liberty Street, Waynesboro. Mrs. Brooks was born in Screven County to Naomi Sasser Lewis and Willie Riley Lewis, in addition to her parents; she was preceded in death by two sisters and two brothers. She resided at her home on Hilton Head Island, South Carolina prior to moving to Macon in 2002 to be near family. Elise lived most of her life in Waynesboro with her husband of 36 years, Willie Nathaniel Brooks who preceded her in death in 1974. They owned and operated W.N. Brooks Trucking and then Leasing Company for nearly 30 years. She was proud of her contribution to the war effort, working at a munitions factory during World War II. In the nineteen-fifties she owned a camellia and azalea nursery. Mrs. Brooks was an avid gardener and won many awards for her floral designs. As a member of The Club of Little Gardens Garden Club, she shared in many projects which beautified Waynesboro and was active in the Woman’s Club. She was a life member of The Garden Club of Georgia, Inc and served on the board of directors of the Azalea District. She was a member of the American Camellia Society and a certified Camellia and Azalea judge. Elise loved boating, fishing, and walking on the beach. She and her husband both enjoyed horseback riding and traveling with their horses to compete in shows. They were the proud owners of Delight’s Brigade, the 1973 four year old Tennessee Walking Horse World Champion. She was a devoted member of First Baptist Church of Waynesboro and an active member of the Joy Sunday School Class for many years. She is survived by her daughter Naomi Brooks Gerson and son in-law Judge Robert Walthall Gerson of Macon. Surviving also are her two granddaughters, Kimberly Brooks Gerson of Macon and Allison Lee Gerson Younkins and husband Victor Daniel Younkins of Atlanta. Other survivors include her sister-in-law Eleanor Brooks DeLoach of Statesboro and several nieces, nephews and cousins. The family is grateful for the loving care that she received at Bolingreen Nursing Center. Flowers are being accepted; however, you may make a contribution to the First Baptist Church in memory of Elise Brooks, 853 N. Liberty St. Waynesboro, GA. 30830. DeLoach Funeral Home & Cremation Service 842 N. Liberty St. Waynesboro, GA. 30830 (706-554-3531), is serving the family of Elise Brooks. You may sign the on-line guestbook at www.deloachfuneralhomes.com

The family of Elise Lewis Brooks created this Life Tributes page to make it easy to share your memories.