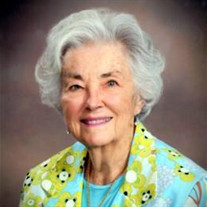 Dorothy Belle "Dee Bee" Macaulay passed away Sunday, October 7, 2018. She was born June 12, 1925 in Murfreesboro, TN, to Emma Belle Adkerson Gracy and Brainard B. Gracy, Jr. where she was a member of the First Presbyterian Church. Educated in local schools, she attended Middle Tennessee State University, where her father was a professor, and received a B.S. degree in business education from the University of Tennessee where she was a member of Delta Delta Delta sorority. During World War II she headed Supply Depot bookkeeping at Smyrna Air Force Base, Smyrna, TN. In 1953, she married Hugh Angus Macaulay, Jr., of Waynesboro, GA, where they lived, were members of First United Methodist Church and where their two children, Belle and Hugh III, were born. In 1969 they moved to Athens, GA where Hugh, a graduate of the University of Georgia, became Vice-President and Southeastern Division Manager of Champion DairyPak, Southeastern Division. Hugh died in 2004. Active in community affairs, Dee Bee served as president of the Waynesboro Garden Club and president of Edmund Burke chapter, DAR. She taught in the Waynesboro High School. In Athens she became a member of the original Greenway Commission. She served as president of Athens Garden Club, Rabun Gap Guild, and Friends of the State Botanical Garden. For several years she was a member of the Garden Club of Georgia's state board and chairman of its State Headquarters House. Dorothy was also a member of Athens-Clarke Heritage Foundation, Athens Symphony Guild, Elijah Clarke chapter DAR, and Friends of the Art Museum. As a member of First United Methodist Church of Athens, she served on the church's Administrative Board, the United Church Women's Executive Board, leader of two circles, and Altar Guild. Her aim was to live so that the world would be a better place. She was preceded in death by her sister, Martha Swasey and her brother, B.B. Gracy. Surviving family members include Belle Clemetson of Lawrenceville, GA; Hugh Macaulay III and wife, Sally of Kennesaw, GA; grandchildren, Macaulay Clemetson, Katie, Claire, and Hugh Macaulay IV; one great-grandchild, Easton Walker McBride; two nieces; one nephew. A memorial service will be held Tuesday, October 16 at 11 a.m. at First United Methodist Church of Athens. A reception will follow in the church’s Hancock Hall. Inurnment will be in Magnolia Cemetery in Waynesboro on Saturday, November 3 at 11 a.m. In lieu of flowers, memorials may be made to St. Mary’s Hospice House, P.O. Box 6588, Athens, GA 30604 or First United Methodist Church of Athens, 327 N. Lumpkin St., Athens, GA 30601. Bernstein Funeral Home is in charge of arrangements in Athens. www.BernsteinFuneralHome.com DeLoach-McKerley-Prescott Funeral Home & Cremation Service, 220 East 6th Street, Waynesboro, GA 30830 (706-554-3531) is in charge of arrangements in Waynesboro. You may sign the guest book at www.deloachfuneralhomes.com.

Dorothy Belle "Dee Bee" Macaulay passed away Sunday, October 7, 2018. She was born June 12, 1925 in Murfreesboro, TN, to Emma Belle Adkerson Gracy and Brainard B. Gracy, Jr. where she was a member of the First Presbyterian Church. Educated... View Obituary & Service Information

The family of Dorothy Belle "Dee Bee" Macaulay created this Life Tributes page to make it easy to share your memories.