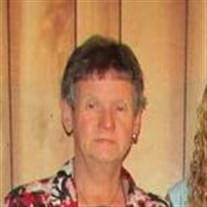 Waynesboro – Brenda Bell Babb Britt, 68, went home to be with her Lord and Savior on Thursday, January 24, 2019, at Doctor’s Hospital. Brenda was born on December 15, 1950, to the late Versie E. and Leroy M. Bell, Sr. She was a loving wife, mother, and grandmother. She seemed to never meet a stranger and would bend over backwards to help others. Brenda was a good Christian woman with a remarkable work ethic. She worked for the Lakeview Restaurant for many years, and in 2015 retired from the Burke County Road Department after 13 years of service. Brenda was a member of the Waynesboro Church of God. In addition to her parents, she was preceded in death by a son, Carol Dean Babb, Jr. Brenda is survived by her husband, Dennis Britt of Waynesboro; two daughters, Renee Scholtes (Mike Ratliff), and Dana Britt both of Waynesboro; a brother, Leroy M. Bell, Jr. of Waynesboro; a sister, Joyce Bell of Brooklet; five grandchildren, Ryan Flakes, Megan Flakes Friese (Billy), Gerald Scholtes, III (Shelbie), Blake Lindsey, Jr., and Kirsten Lindsey; four great-grandchildren, Makenley Friese, Billy Friese, Jr., Ryan Flakes, Jr., and Mallorie Harron; lifelong best friend, Janet Bennier of Union Point, GA.; and many nieces and nephews. A memorial service honoring Brenda’s life will be held at the Waynesboro Church of God on Sunday, January 27 at 3:00 pm with the Rev. Matt Wigley officiating. The family will receive friends one hour prior to the service. Memorial contributions may be made to the Waynesboro Church of God. You may sign our guestbook at www.deloachfuneralhomes.com

The family of Brenda Bell Babb Britt created this Life Tributes page to make it easy to share your memories.

Waynesboro – Brenda Bell Babb Britt, 68, went home to be with...