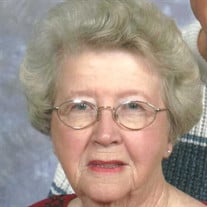 Waynesboro, GA – Mrs. Bettye Neal Tallent, age 85, entered into rest Sunday, May 10, 2015 at Burke Medical Center after a long battle with Alzheimer’s. She was born in Quincy, Florida on June 17, 1929 to the late Willis T. Neal and Emma Kate Neal. In 1950 she met the love of her life, Bill Tallent, and moved to Waynesboro in 1955. As a member of First Baptist Church in Waynesboro, she was a member of the Spares and Pairs Sunday School Class and the Ball Club. Bettye will always be remembered as a woman who loved family gatherings and working in her yard. In addition to her parents, she was preceded in death by a brother, Billy Neal of Crawfordville, GA. Survivors include her loving husband, Bill Tallent; three children, William Neal Tallent of Martinez, Sally Tallent Oglesby (Dale) of Girard, and Laura Tallent Johnson of Waynesboro; six grandchildren, Chris Tallent, Billy Tallent, Jessica Tallent, Ashley Joyner (Kevin), Randall Johnson, and Allison Johnson; five great grandchildren; a brother, Bobby Neal of Thomson; a sister, Jean Rogers of Atlanta; and many nieces and nephews. A memorial service will be held at 11:00 am Wednesday, May 13, 2015 at the funeral home with Dr. G. Al Wright, Jr. officiating. The family will receive friends one hour prior starting at 10:00 am. Memorials may be made to the Southeastern Firefighters Burn Foundation (706) 650-2876. Memorials are in honor of her grandson, Billy Tallent. The family would like to extend a special thank you to the employees of the Alzheimer’s unit at Brentwood Terrace Health Center for the love, care, and compassion they have shown during her stay. DeLoach–McKerley-Prescott Funeral Home & Cremation Service, 220 East 6th Street, Waynesboro, GA 30830 (706-554-3531)

The family of Mrs. Bettye Neal Tallent created this Life Tributes page to make it easy to share your memories.