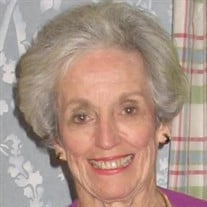 Barbara Jones Lindgren, 85, of St. Simons Island passed away and entered her eternal home in Heaven on Monday, April 6, 2020 in the Southeast Georgia Health Center in the presence of her loving husband. During her brief illness, she was attentively cared for by the skilled medical and nursing staff of the Health Center. Barbara was born August 19, 1934 in Millen, Georgia, the daughter of Robert Chapman Jones and Frankye McKenzie Jones. Her connection to the Golden Isles began as a small child vacationing on St. Simons with her family. She graduated from Millen High School in 1952 and attended one year at Florida Southern College in Lakeland before transferring to Auburn University where she graduated in 1956. She was active in Alpha Delta Pi Sorority. After graduating from Auburn, she received a teaching certificate from Georgia Southern University in Statesboro. Then it was time to “go to work.” Barbara began teaching third grade at Reynolds Street School in Brunswick. While she enjoyed her short teaching career, the best part was that she had a “blind date” with a Naval Officer at NAS Glynco—the beginning of more than 60 loving years as the wife of John Lindgren. After her marriage in 1959, She lived in Atlanta and then Carrollton, Georgia before returning to St. Simons with her family as a permanent resident in 1972. Barbara was an active member of St. Simons United Methodist Church where she taught Sunday School and was involved with many ministries. She generously gave her time and talent to the Walk to Emmaus ministry for many years until health reasons prevented her from continuing. Her graceful, warm, and generous spirit was demonstrated by the loving hospitality she showed to those visiting her home. She was a lover of the natural beauty of God’s creation and expressed this in her talent for gardening. She had a keen eye for a “little root” of a plant and knew just where to place it in her garden. She would always remember the story of where the plant came from or who gave it to her, giving added meaning to her creativity. Barbara was a wonderful and loving wife, mother, and grandmother. She is survived by her husband, sons, Jones Lindgren (Mary) of Atlanta, and their three children Mary Craig, Chapman, and Kate; and Stan Lindgren (Beth) of Radnor, Pennsylvania and their two children Jack and Maly. She was preceded in death by her father and mother, her sister Caroline Jones Smith, and her granddaughter Frances Whitehead Lindgren. A private family graveside service was held on Friday, April 10 and she will be buried with her family that has gone before at the Jones/Law Cemetery, Fairhaven United Methodist Church in Herndon, Georgia. A celebration where Barbara’s many friends may gather to honor her life will be held at a later date. In lieu of flowers, the family suggests donations to Fairhaven United Methodist Church at PO Box 1096, Millen, GA 30442 or St. Simons United Methodist Church, 624 Ocean Blvd, St. Simons Island, GA 31522. DeLoach-McKerley-Prescott Funeral Home & Cremation Service, 220 East 6th Street, Waynesboro, GA 30830 (706-554-3531). You may sign the guest book at www.deloachfuneralhomes.com.

Barbara Jones Lindgren, 85, of St. Simons Island passed away and entered her eternal home in Heaven on Monday, April 6, 2020 in the Southeast Georgia Health Center in the presence of her loving husband. During her brief illness, she was attentively... View Obituary & Service Information

The family of Barbara Jones Lindgren created this Life Tributes page to make it easy to share your memories.